I broke library rules today and took quite a few pictures of Max at storytime.  I realized that he's nearly 3, nearly aging out of the "baby" storytime and ready for the "preschool" storytime, and I needed some mementos of his favorite part of the week. 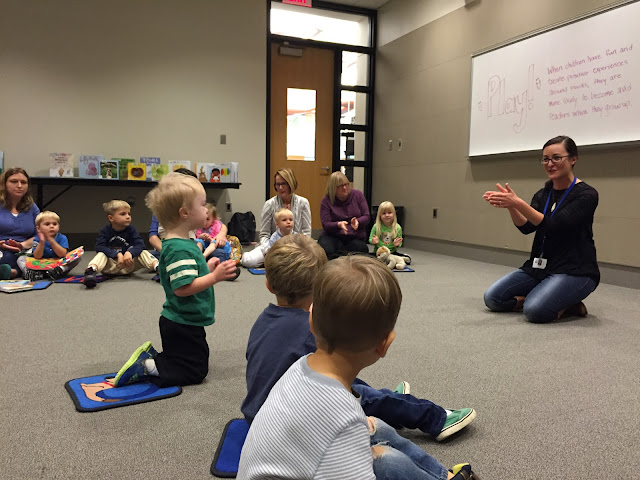 Max loves storytime.  He isn't shy about pulling up a carpet square front and center.  (He was actually sitting in the middle of the circle, alone, for five minutes before the other boys came to join him.)  For a long time he has been signing along to the familiar songs--they start and end with the same ones each week.  Lately he has really started signing along with everything.  He copy's the librarian's motions, he adds his own signs when none are prescribed.  (Today when they talked about a "black" train he signed "block," and when the train went around the "back" he signed "backpack". "Train," however, he knows, and just signs "train.") 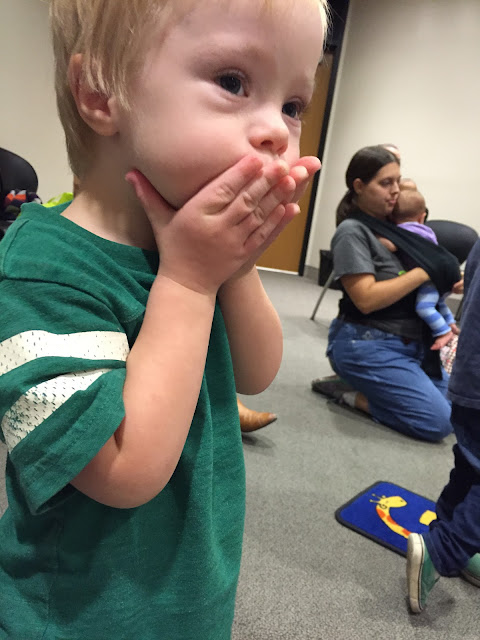 Don't tell his PT, but this is his best hour of physical therapy each week.  He stands to do the rhymes, walks over to get his own book to read, and tries to jump around.  Afterwards today he kept on trying to practice his walking--I think watching all the other kids running around motivates him.  Every time a song ends, Max signs off by blowing kisses as he lets his legs go limp and sits back on the floor.

I'm not going to name any names, but my first son?  He would run crazy all during storytime and not pay one bit of attention.  So please excuse me if I brag a bit about how the younger brother pays attention, plays along, and generally sets a good example for all the other kids.  This is my 20 minutes of showing off, my turn to reassure the other moms, "It's okay, your kid will catch on eventually."
Posted by attableblog at 2:21 PM 1 comment:

I tell everyone we have a picky eater and then this happens: Do not get between the boy and his spaghetti!  Our list of things Max will reliably eat includes spaghetti, cheerios with milk, pulled pork, graham crackers, milk, milk with instant breakfast mixed in, sweet yogurt, vanilla ice cream, and chocolate cake.  I think that's it.  There are a few other foods he will eat when Taylor Swift is playing.  Sigh.  Toddlers.
Posted by attableblog at 2:19 PM No comments:

31 for 21: Why An Inclusive Preschool Classroom? 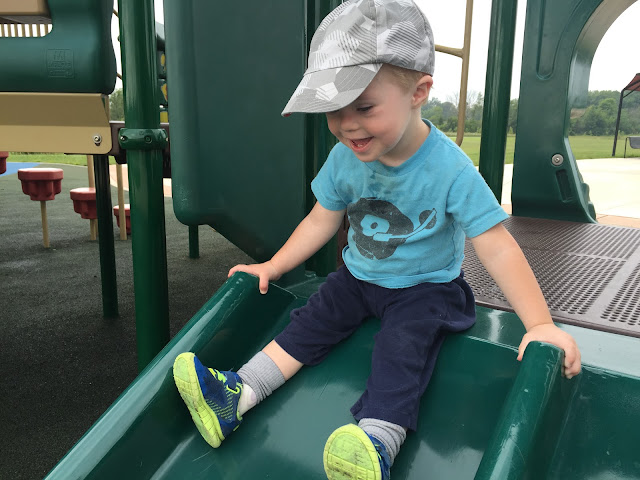 Yesterday I got to attack some misconceptions and assumptions I've heard as we've explained our decision to send Max to a mainstream preschool.  Now for the fun part--some of the reasons why we ARE making this choice.

31 for 21: Why Not Special Education Preschool?

You might have caught in the last post that Max is attending a regular, private, church run preschool.  Kids with developmental delays or disabilities are entitled to free, public preschool when they turn 3, and so we're doing something a bit different from many families in our area.  Our decision is something I want to write about because I don't talk about it much.  Unfortunately, the discussions we've had often pit typical classrooms against special education classrooms.  Since I hope that both inclusive settings and professionals with special education experience will have a lot of influence on Max's learning, I hate this dichotomy. So, to set the record straight:


That's enough for today.  Tomorrow, some reasons why we ARE sending Max to a typical preschool. 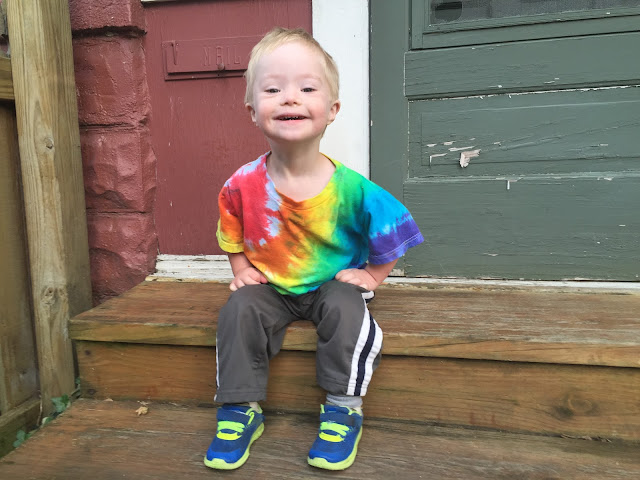 Posted by attableblog at 8:51 PM No comments:

Today Max went to the library without me.  With his preschool.

(For the record, I started writing this last night.  You know, one post a day and all that.  But before I finished life happened, and then I was asleep, and, well, here we are.  So I scrapped what I had, and started over, because, as I just said, Max went on his first ever field trip today.)

Until two months ago, a friend cared for Max at her in-home daycare.  She's an amazing baby-whisperer type, and dropping Max off with her felt like leaving him with family.  So I knew I would be okay dropping him off, and he would be okay playing and learning without me, but I was worried about how he would be received, and what new challenges we would find as he entered a classroom setting.

Our school?  They have been amazing.  They didn't bat an eye when they heard the words Down syndrome.  The director has been diligent about thinking of the places where Max might need a hand (for instance, knowing who is responsible for carrying him out during a fire drill since he doesn't walk), but not smothering him.  His teachers report back on his antics, tell me when he's learned something new, but generally don't dwell on listing off how he was or wasn't keeping up with the class each day.  Max had a first picture day, brought home his first artwork, went on his first field trip.

The best part, for me, is watching him communicate with his new class all on his own.  One day when I picked him up he was wearing a hat--a hat he found in his classroom in the morning and hadn't given up all day.  It's a little thing, but he loves hats at home, too, and I was so glad that without many words he was able to let that piece of his personality shine.  He asks to hear songs again and again, he pushes his way to the front of the room to watch the video they see before naptime.  He comes home covered in paint one day and spaghetti sauce the next.  He's being himself, and his teachers and friends are loving him for it.

The preschool director, Max's two teachers (and one's daughter), one parent and one student attended the Buddy Walk with us this year.  That's six folks who were at the Buddy Walk who wouldn't have had a connection with Down syndrome if we hadn't taken a chance on sending Max to a mainstream preschool.

I do worry that our experience in the last month has made me unreasonably optimistic about my expectations for inclusion in the future.  After all, it's not too hard to include an adorable two-year-old, when all of the other two-year-olds are also wearing diapers and learning how to talk.  I've heard the refrain that it gets harder.  But I'm going to ignore it for now.  Preschool, for me, is a delightful little bubble, and we'll deal with the rest when we get there.

After all, Max now has 6 new advocates working for his inclusion.
Posted by attableblog at 1:33 PM No comments: 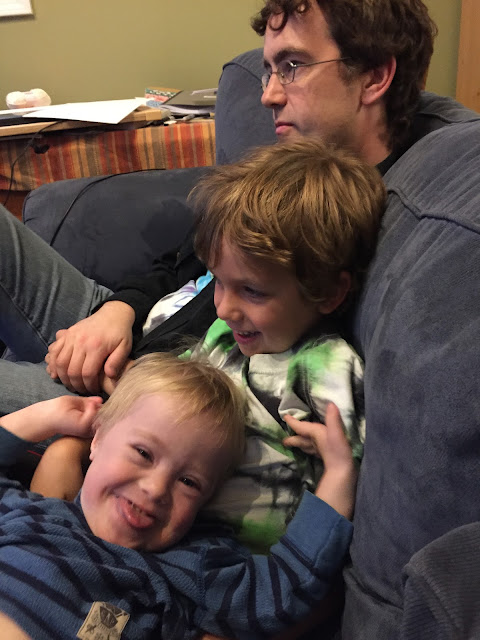 Time for a end-of-the-weekend photo post.  On day 4, really?  I wasn't posting shameless photos until at least halfway through last year.
Posted by attableblog at 10:18 PM 1 comment:

For the first three days of October, my Facebook feed has been full of awareness.  Facts and stories and reposts and reminders.  It is Down syndrome awareness month, after all.

I'm not exactly sure where I fit into this all.

It's not that I mind having opinions.  I have quite a few opinions, and I'm not shy (or even particularly socially competent) about sharing them.

It's personal, certainly.  While it might be fuel for some, for me it just makes it harder.   Last month we had our first meeting with the school district -- maybe that is worth it's own post someday.  Let's just say that while I have all sorts of articulate opinions in the abstract, when it came down to trying to advocate for my specific child and the specific options available for him, I quickly became a blubbering mess.

It's also not personal.  I'm not the one with Down syndrome. And the little guy I'm advocating for is 2.  He doesn't have too many opinions yet--at least not beyond his picky taste in food and music.  Any advocacy I do is with him in mind, and he hasn't told me yet how he wants me to advocate.

I'm not sure exactly what steps I want to ask others to take.  I'm not even sure what steps I want to take.  There isn't a cure to find or a bill that needs to be signed or prayers that need to be said.  There's research I could be learning about in all sorts of directions, but mostly I just want to sing silly songs with my toddler.

So to the rest of you, keep up your awareness building.  I'm watching and figuring, and waiting for some piece of this whole advocacy thing to set me on fire.  Until then I'll keep on wondering if I'm doing enough, and keep on learning about Down syndrome one day at a time.
Posted by attableblog at 11:00 PM No comments: